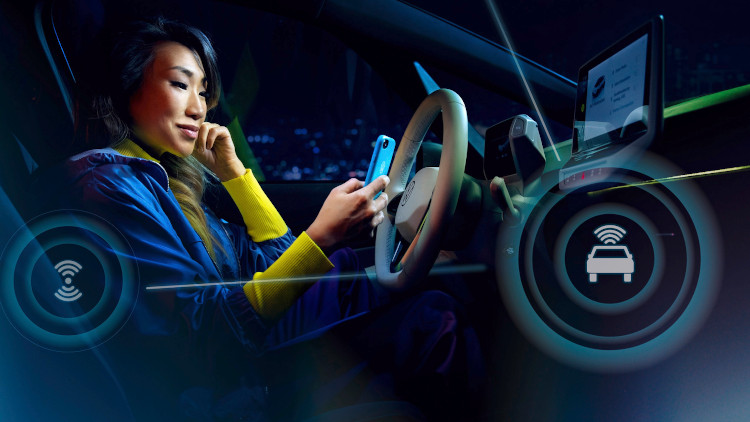 Renaissance of an ingenious idea From the
T2 electric “Bulli” to the ID. Buzz

Germany is crowned European football champion for the first time, a band by the name of ABBA is formed in Sweden, and the first all-electric Volkswagen van rolls off the assembly line in Wolfsburg. The year is 1972 – and what not many people know is that it was in this year, that the dream of a zero-emission “Bulli” for everyday use was born. A dream that is to become reality 50 years later with the ID. Buzz. We journey back to the van’s roots.

Volkswagen laid the foundations for the all-electric ID. Buzz, which has multiple generations of Volkswagen vans in its genes, more than 50 years ago: In 1970, Adolf Kalberlah founded the “Future Research” development area, which designed the first Volkswagens with electric drive systems. Two years later, Volkswagen presented an electric van based on the T2 – initially as a test vehicle, then later as a very small batch, with various optional set-ups.

The vision of the electric “Bulli” is born, but not yet practical. The first prototype of the T2 – a flatbed truck with an open loading area – weighs 2.2 tons and carries an 880-kilogramme battery with a capacity of 21.6 kWh. Compared to today’s battery systems, the cells are not only heavy, they also store significantly less energy. 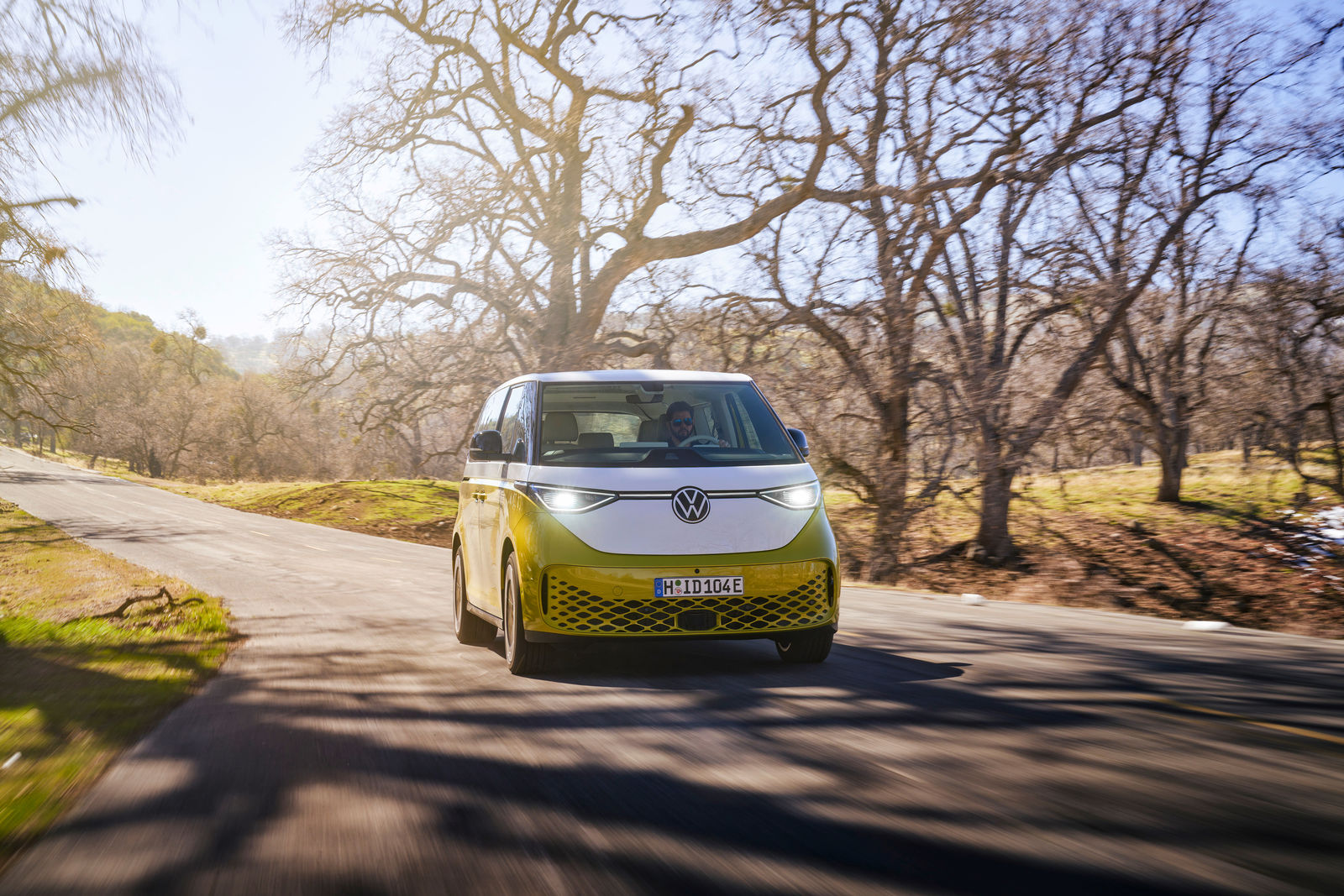 50 years later, the batteries in the first generation of the ID. Buzz have a capacity of 77 kWh (net) and weigh in at 500 kilograms – the result of many years of research and development. Last but not least, technological progress has had a considerable effect on agility and range, allowing the all-electric ID. Buzz to do its thing in the high-volume market.

While we’re on the subject of agility: the electric T2 from 1972 was based on the platform of the conventional T2. As such, it was difficult to install the battery in the vehicle underbody, and the battery was mounted on the loading floor, where it could be removed. In contrast, the ID. Buzzis based on the Modular Electric Drive Kit (MEB) and has a totally new basis architecture. This makes it possible to install the battery package very deep and flat in the “sandwich floor”. The result: a lower, more dynamic centre of gravity, guaranteeing agility, safety and a healthy portion of driving pleasure. It also creates new possibilities, more room and a new sense of space in the interior.

As no motor is installed at the front, allowing an extremely large steering angle, the ID. Buzz is able to make use of another advantage: the turning circle of the electric “Bulli” is just eleven metres – similar to that of the compact Golf. This guarantees driving pleasure in even the tightest of spaces, making it perfectly suited for the city and narrow car parks.

As the range of the T2 electric van was only about 85 kilometres, a highly-innovative – for the time – battery changing system was employed in 1978 during a fleet test with seven T2 in Berlin. At the changing station in the Tiergarten district, it took just five minutes to replace an empty battery with a fully-charged one. This drastically reduced the waiting times of several hours, which would have been required for the charging process.

The principle of battery replacement is no longer used these days – not least because charging performance has improved immeasurably. Take the ID. Buzz, for example: Thanks to a maximum charging capacity of 170 kW at rapid charging stations, batteries can be charged from five to 80 percent in roughly half an hour.

The power input (left) on the T2 electric van was seldom required. The 880kg battery (right) was removable and installed on the loading floor.

Energy recovery system already to be found on the T2

When it comes to energy management, Volkswagen was already progressive in the 1970s. The T2 electric van already possessed an energy recovery system, which recovered kinetic energy under braking and then used this energy to charge the battery. A technological tour de force at the time, this is now taken for granted. This technology has been refined and optimised for the ID. Buzz – however, the basic principle of generating energy through inertia in a closed system remains the same. This can increase the range by 20 to 30 percent.

50 years of electromobility: the T2 electric “Bulli” and its successor, the ID. Buzz. 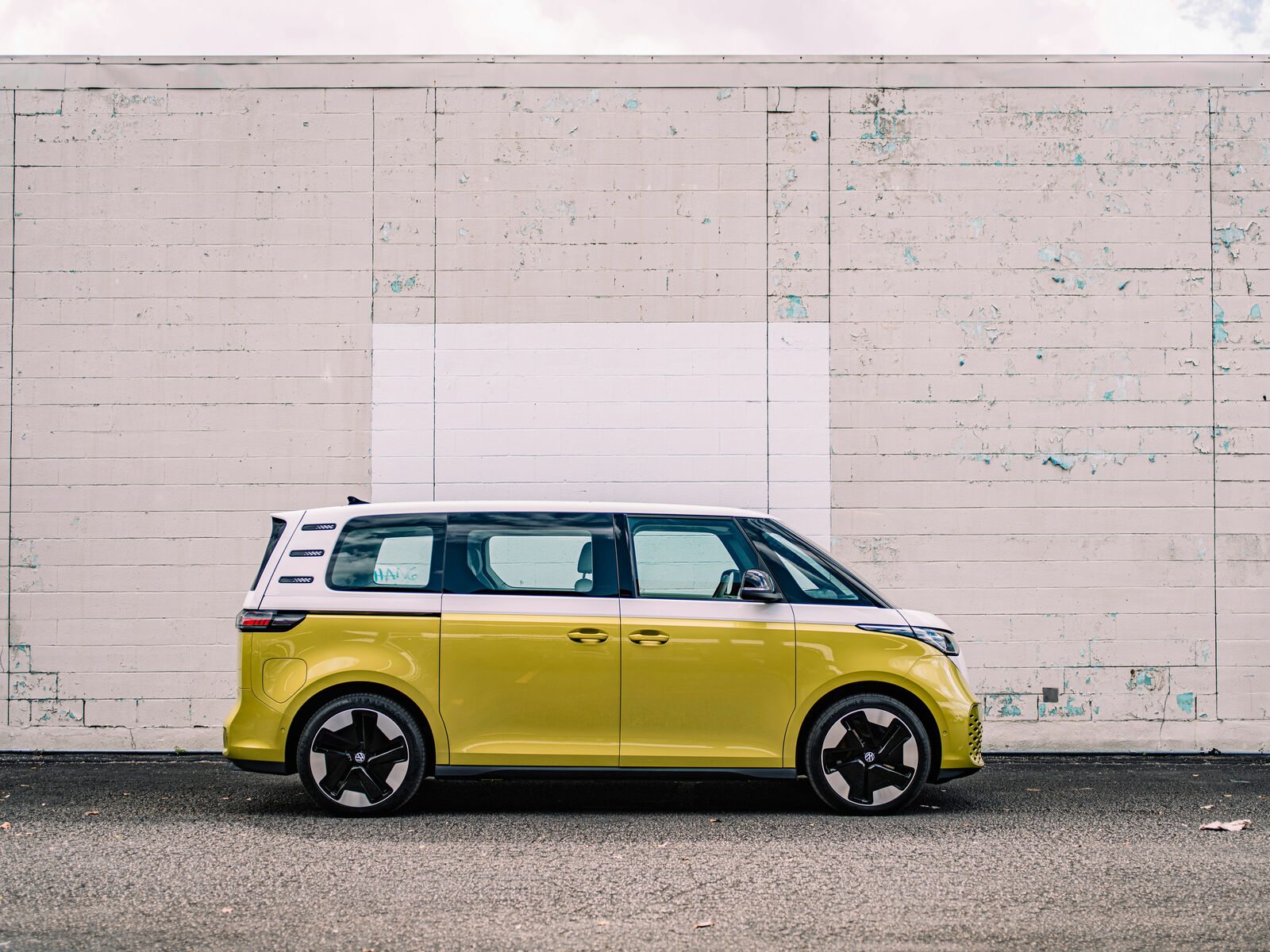 There have also been some fundamental changes, which are down to technological development. Back in 1972, who would have thought one day they could teach their “Bulli” to park itself, as you can the ID. Buzz? Or speak to it via voice control, to prevent the windows steaming up or to request that the “Bulli” calculate the route, including stops for charging?

What began as pioneering work with the T2 electric van in 1972 is now, 50 years later, reality. Progressive and versatile – the ID. Buzz combines the most important automotive trends of our time: electromobility, intelligent networking of assistance and information systems, technical prerequisites for automated driving and over-the-air software updates. 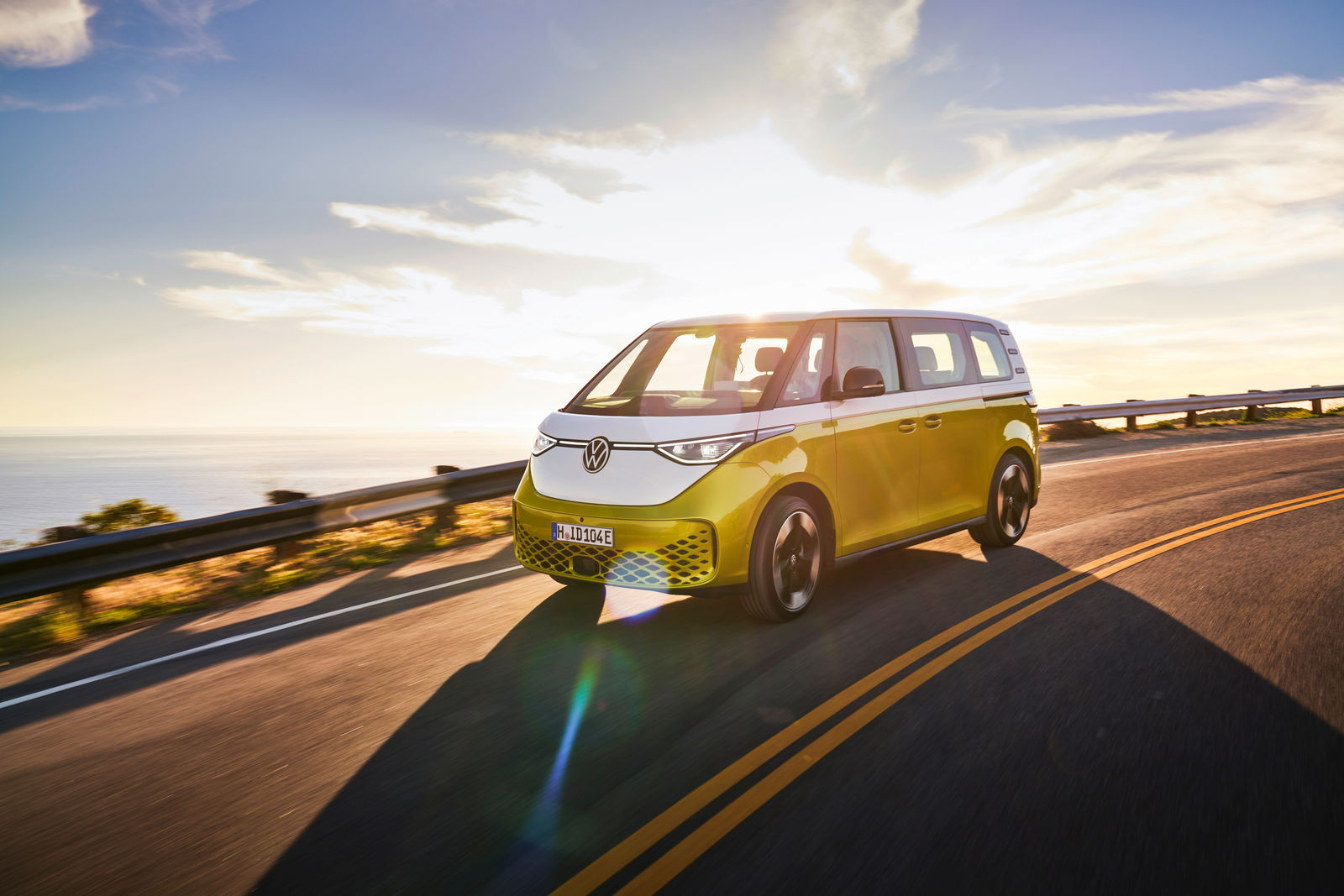 Acid test for the ID. Buzz The new high-tech Bulli is put through its paces Smart mobility The ID. Buzz as an E-shuttle on Astypalea

Volkswagen ambassador Ewan McGregor "The ID.Buzz puts a smile on my face" ID.4 production in Chattanooga US plant shapes up for e-mobility

Interview with Tomasz Bachorski “Good interior design should not be complicated” 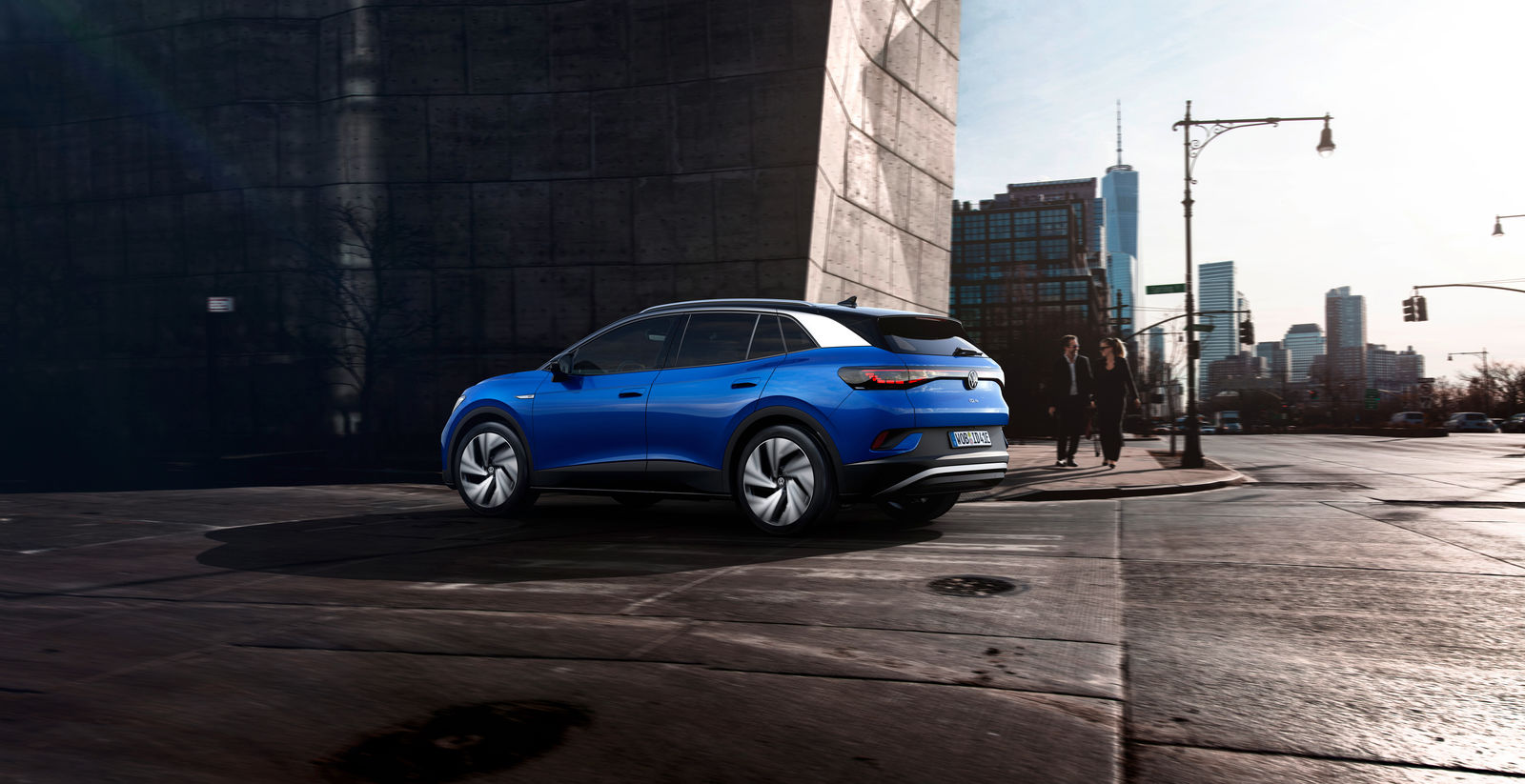